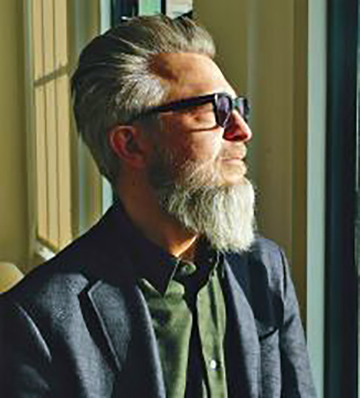 Robert Kirkbride is Dean of Parsons School of Constructed Environments, and Professor of Architecture and Product Design at Parsons School of Design, The New School, where he received the University Distinguished Teaching Award and established the Giuseppe Zambonini Archive. Dr. Kirkbride is a scholar-practitioner whose work centers on memory, identity and the constructed environment. Robert directs the architectural design atelier, studio ‘patafisico, and is also Spokesperson and a founding Trustee for PreservationWorks, a national non-profit organization promoting the preservation and adaptive reuse of Kirkbride Plan Hospitals. In addition to residential projects, installations, and furniture, Dr. Kirkbride designed the Morbid Anatomy Museum with Anthony Cohn, and he authored the award-winning multimedia online book Architecture and Memory, which reconstructs the educational and rhetorical uses of two memory chambers from the Italian Renaissance.

Robert is a Fellow of the Canadian Centre for Architecture, and was architect-in-residence at the Bogliasco Foundation in Genoa, Italy. He was also a co-founding partner of the low-impact landplanning company, Hawk Circle, and the furniture design company, Studiolo, and previously worked with Dr. Anne G. Tyng, Antonio Citterio and Terry Dwan, POLO/Ralph Lauren, Edward Earle Kirkbride, and the National Park Service. His design and research projects have been featured in the film XX/XY, the Oxford Handbook of Rhetorical Studies, the Montreal Architectural Review, The National Academy of Science’s ISSUES magazine, Vogue, The Financial Times, The New York Times, The Washington Post, Chora 4, Mark Magazine, C3, Alphabet City’s FUEL, WATER, and AIR, among others. Robert has been an editorial board member of the Nexus Network Journal, visiting critic at the University of Edinburgh, guest professor at the University of Montréal, and conducted design charrettes at the Cooper-Hewitt National Design Museum. Dr. Kirkbride received his Ph.D. in the History and Theory of Architecture from McGill University, and a Master of Architecture and BA in Design of the Environment from the University of Pennsylvania.